December 11, 2013
So I've actually accomplished a lot this week!I finished writing Pieces of Me. I'm just waiting for the last bit of notes from my beta readers and then I'll be sending it to Jenny at Editing4Indies--this is the first time I've had an actual editor so I'm excited!
Once I finish final edits, I'll pick a release date and share the new cover.

Komal Kant is in town this week. We've been working on the book we're co-writing, UNFAMILIAR. We've done a lot of character development, worked out a detailed outline and tweaking the plot. It's going to be amazing and I can't wait. We've written up to chapter 3 so far.

Then last night while we were watching World War Z, I had some MAJOR inspiration (Weird, I know. And no, the inspiration is not at all zombie-related). You know how I started Lark and In the Shadows with a dream? Well, I wanted to continue that with Like the Dawn. I knew what/who I wanted her to dream about but I wasn't sure HOW it was going to happen--until last night! It just came to me and it's absolutely perfect (heart-wrenching to think about, but perfect) soooooooooooooooooooooo this got started a month earlier than I was planning to: 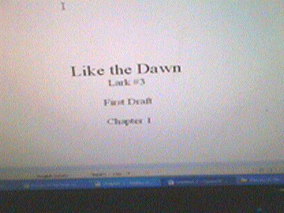 It's been a very productive week in the Cope house. I'm going to fix dinner now and then teach Komal how to knit and then we'll probably work some more later tonight.
I seriously can not wait to publish Pieces, finish writing Unfamiliar and start writing Like the Dawn. 2014 is shaping up to be another busy year! I just hope it's the good kind of busy and we have far less trips to the hospital in 2014. :)

Then I plan to spend the summer re-working Forget Me Not, which is a YA contemporary romance about a boy and a girl who knew each other as children but are separated for several years and live very different lives. When they are reunited in high school they both pretend not to remember the other. I've started this one, I'm actually about half way done with it but I got caught up in Aria and Holden's story so it got put on hold.
Lots of stories to tell this next year! I hope you all stick around for them. :)