NEW RELEASE!
DARK ROSES is an amazing box set that includes EIGHT bestselling Paranormal/Fantasy novels for only .99! It's available at Amazon, Barnes and Noble, Kobo, iTunes, and Smashwords. Be sure to One-click it! It will be available for a limited time only! 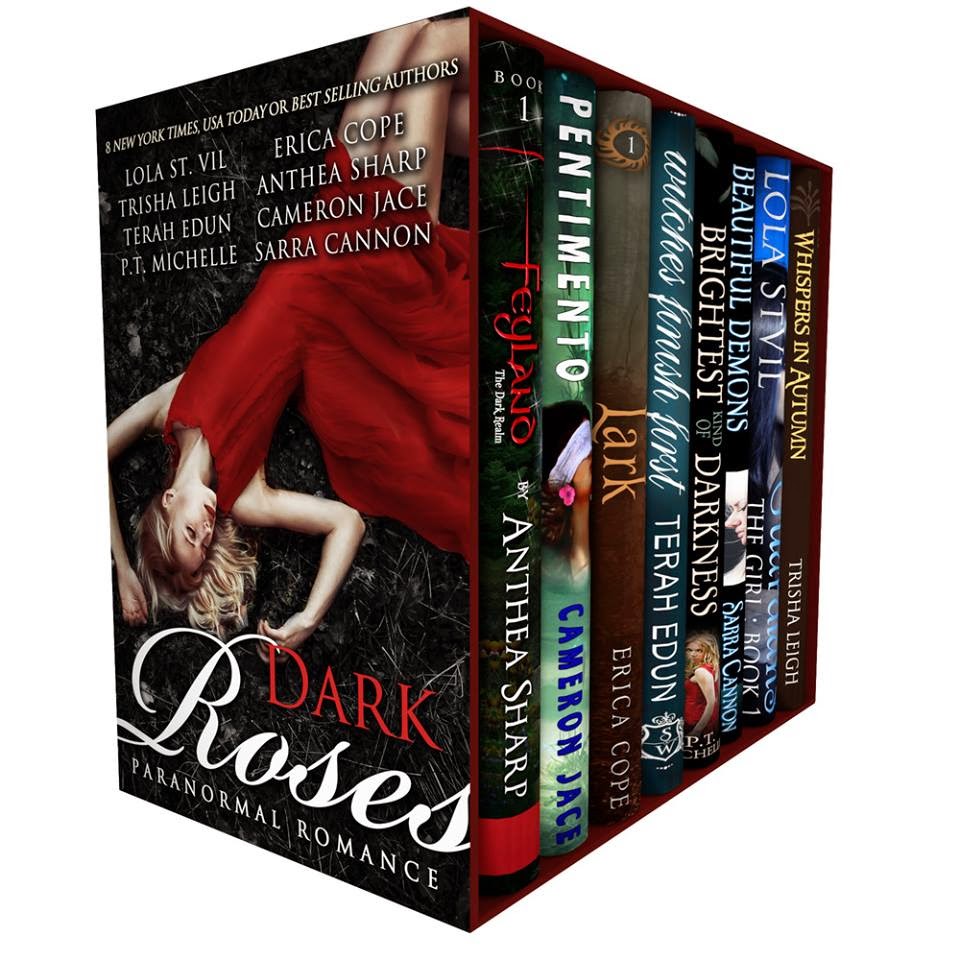 Eight bestselling YA authors. Eight stories of paranormal romance. Eight series to take your breath away. From kick-ass cheerleaders to leaders of the fae, these teenage girls are out to save their worlds, one unforgettable adventure at a time. The only thing standing in their way - love, loss & a little magic.

*Individually, these titles have 1400 5-star reviews on Amazon!*

From NYT & USA Today Bestselling author, P.T. MICHELLE - BRIGHTEST KIND OF DARKNESS
Nara Collins is an average sixteen-year-old, with one exception: every night she dreams the events of the following day. Due to an incident in her past, Nara avoids using her special gift to change fate...until she dreams a future she can't ignore.

From USA Today bestselling author LYLA PAYNE, writing as TRISHA LEIGH - WHISPERS IN AUTUMN
For sixteen years, Althea has been alone in her ability to feel emotion, to think for herself, and on occasion, light things on fire. The autumn brings a boy named Lucas to town, along with unwanted scrutiny from the alien race of Others that rule Earth, and if she wants to live to see winter Althea will have to stop hiding--and start fighting

From USA Today bestselling author, ANTHEA SHARP – FEYLAND: THE DARK REALM
Jennet Carter never thought hacking into her dad's new epic-fantasy sim-game would be so exciting... or dangerous. But behind the interface, dark forces lie in wait, leading her toward a battle that will test her to her limits and cost her more than she ever imagined.

From bestselling author, LOLA ST. VIL - GUARDIANS: THE GIRL
The prophecy says "should human and angel unite, it will bring the end of the human race..." Yet Emmy & Marcus can't fight their feelings. All they want is to be together; the only way for us to survive is to keep them apart...

From bestselling author, TERAH EDUN - WITCHES FINISH FIRST
Witch. Daughter. Queen. Katherine is second-in-line in a provincial town ruled by her coven. But she's about to learn that the hierarchy of witches first, fae second, and humans last isn't set in stone...at least not in high school.

From bestselling author, ERICA COPE - LARK
An ordinary girl. An ordinary life. Until her Elfin heritage comes to light. Mia Carrington discovers she's the heir to the kingdom of Álfheimr in the most unexpected way. But it's the Dark Elves that pursue her that have her world turned upside down, because they will let no one and nothing stop them from claiming her.

From bestselling author, CAMERON JACE - PENTIMENTO
On her seventeenth birthday she comes of age. Her seventeen birthday is also the day the Beasts come for her. After the destruction of the world these rulers of new America provide safety and services to human in exchange for one new teenage girl every week. They call them the Brides, and they never come back.

From bestselling author, SARRA CANNON - BEAUTIFUL DEMONS
Harper Madison's inability to control her extraordinary powers has gotten her kicked from countless foster homes. Shadowford Home for Girls and Peachville High are her last chance. But when evidence ties her to the gruesome murder of a Demons cheerleader, Harper discovers this small town has a big secret.