The Story of the Missing Scarf (and a giveaway!) 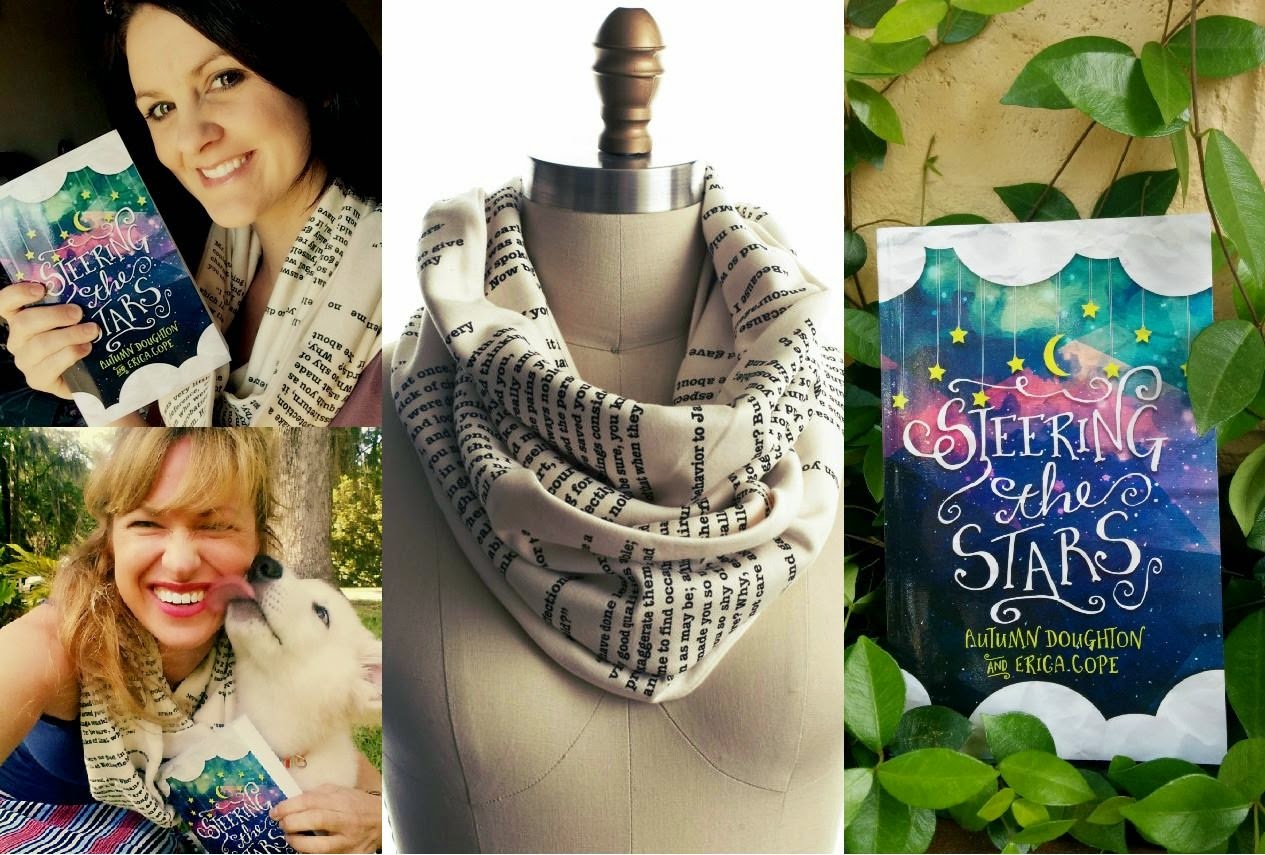 Erica: I have been coveting these Storiarts scarfs for AGES! Then after Autumn wore hers to NOLA in January I decided I MUST have one. I told my husband it was what I wanted for my birthday this year and it would be perfectly fine with me if he got it a little early (*cough*now*cough*).

Autumn: If it wasn’t obvious from my posts, I LOVED working with Erica on StS. Writing with her was like being at an extended slumber party. For months and months we chatted all day while we exchanged ideas and worked—her from Missouri and me from Florida. We were already good friends but co-writing the book solidified what I already suspected… Erica and I are destined to be lifelong friends and we make each other better. As we got closer to release date, I wanted to give her something symbolic to express this feeling and I remembered that she loved my Pride and Prejudice scarf. So I ordered one for her and got an adorable card and planned to send it to her house so it would arrive before the StS release. No joke, right after I ordered the scarf, she posted a photo of the exact same scarf on Facebook encouraging her husband to get her one for her birthday. My eyes went wide and I immediately messaged her hubby and said, “DON’T GET THE SCARF!”

Erica: So I had no idea that Autumn was so sneaky and wonderful and this beautiful scarf was on its way to me. If I did I probably would've sent her something WAY cooler than the outer space socks I found at a museum in KC that reminded me of her. Right after the release of the book, Autumn got the socks in the mail and asked if I had received a package from her yet. I hadn't. A few days later and still no package...

Autumn: I was getting so frustrated! Erica and I had both had the idea to get each other surprise gifts and hers had arrived (and btw, I luuuurved the socks because I am a space/NASA nut so they were perfect), but mine had not reached her and it had been well over a week since I’d mailed it. And, of course, I had sent it regular mail so there was no tracking for me to follow up with.

Erica: Finally, Autumn broke down and told me what I was supposed to be waiting on. I was even more excited and I checked the mail eagerly every day but the days came and went and NO SCARF!

Autumn: Weeks passed and meanwhile I heard from several people that I had mailed things to at the same time I mailed the scarf that either, 1) their package never arrived, or 2) their package arrived but it was damaged and parts were missing. Now, I’m not one to claim that I love the post office but I’ve never had a problem with it. In fact, say what you will about the cost of stamps but I still can’t believe that for less than fifty cents I can send a piece of paper to Montana. But having four packages go missing or get damaged in less than a week was bizarre and driving me crazy. I’ll admit that Erica and I may have gotten a little obsessed during this time.

Erica: Every day, Autumn and I checked in online about the case of the missing scarf. At first we assumed it had just gotten lost in the mail. Then more of her mail went missing and pretty soon our imaginations ran wild. She became convinced that the people that work at her post office extension (which she claims is really just a counter in a QuickMart??! WEIRD.) must be taking her mail and may have decided they wanted the scarf. We started planning how we could catch them.

Autumn: My husband works with computers so I seriously started hounding him to help me install a camera in the bottom of a box so that I could mail it to myself. He thought I was completely crazy but he’s used to my crazy so he went along with it. It’s not that I even wanted to get anyone in trouble; I just NEEDED to know what happened to the scarf! Also, by this time, more than a month had passed so I caved and just bought another Storiarts scarf for Erica and this time had it sent directly to her.

Erica: One weird thing is that Autumn and I talk every single day but we never talk on the phone. We message each other constantly. We text. We might even Skype, but I think in the years that we’ve known each other, we’ve talked on the phone maybe once. But one morning my phone rings and I look down and I see her name.

Autumn: Erica’s right. We never talk on the phone. But on this morning I had this weird compulsion to call her. I even questioned it and wondered if she would think me calling was strange, but I called anyway. Mostly, I wanted to tell her that I had just bought another scarf and it was on its way. So there I was standing on my front porch and telling her that a new scarf had just been purchased and was on the way after a month of waiting. As we were laughing about this, I see a mail truck turn the corner. This was odd in itself because my mailman always comes in the afternoon. He parks in front of the house and I see that it’s not my normal mailman and I just knew. I KNEW that he had the scarf. So here he comes, up the walk, looking ashamed with this completely destroyed package—seriously, the envelope had been taped up so many times that it looked like it had been through the apocalypse and both the addresses were illegible (I still have no idea how they found me), AND there were international stamps on it so I knew the scarf had been places. But the point is that it arrived.

Erica: We both laughed hysterically. And we knew right away that the scarf was special and it was meant for one of our readers. Autumn and I both have one and now one of you can have a Pride and Prejudice scarf and a paperback of Steering the Stars signed by both of us.

Autumn: Seriously, now the three of us can plan matchy-matchy outfits.

Erica: Just use the rafflecopter to enter and GOOD LUCK!